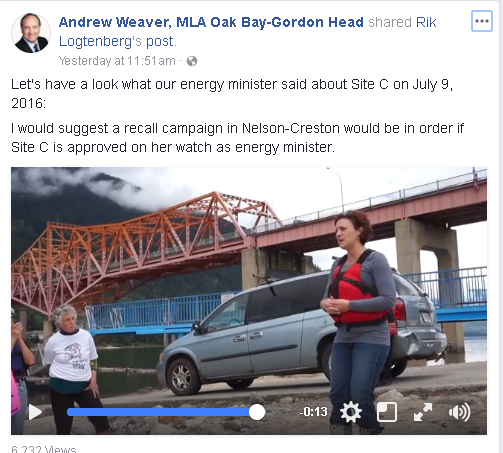 That comes as the New Democrats announced today they will push ahead with the Site C dam.

Andrew Weaver shared a video of Mungall at a Paddling for the Peace protest against the project in 2016.

Weaver told reporters today that he expects Mungall’s constituents will feel betrayed, even though the issue does not directly affect her riding.

However recall campaigns against MLAs can’t start until 18 months after they’ve been elected.

They require the signatures of 40 per cent of eligible voters.

While they’ve been tried 26 times over the last 20 years, none has ever succeeded.

That includes a recall petition against Nelson-Creston MLA Blair Suffredine in 2002.

The full video is below.