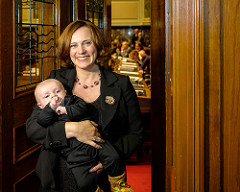 For the first time at BC’s legislature a member introduced their new baby from the chamber floor. Nelson-Creston MLA Michelle Mungall introduced her son Zavier from her seat on Monday, October 15 after an eight-week maternity leave.

“If a vote takes place and I’m looking after my son in the office or have him while I’m in a meeting in my office I can run down and make sure that my constituents voices are heard with that vote being cast and I won’t miss it because I have to find somebody else to look after  my son.”

Minister Mungall describes it as a very important step for democracy as a whole.

“It really goes to show how this place, our democratic institution, is becoming more family friendly and that means we’re going to have a stronger democracy because there’s a lot of young parents in this building and they’re able to be parents as well as good representatives.”

On March 8 of this year there was unanimous support for a rule change that allows infants to be on the floor while in the care of a parent.