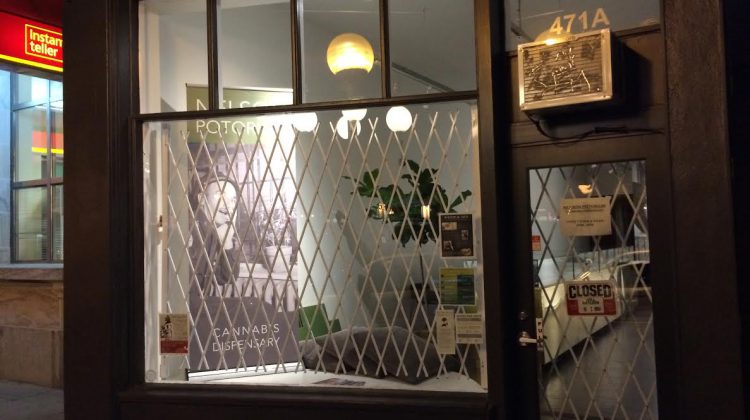 The Nelson Potorium was one of three cannabis dispensaries to win an endorsement from the city, but it required some luck. (Greg Nesteroff photo)

Nelson city council has given its blessing to three of four applicants hoping to establish recreational cannabis dispensaries, but it required ping pong balls drawn from a salad bowl.

The lottery occurred tonight in council chambers after three applicants sought two available positions downtown. City staff, who scored the applications, felt they were very closely matched. A by-law previously adopted calls for a lottery in those circumstances to help decide the winners.

“Some people might be surprised, but lottery processes are very common for all kinds of situations,” city planner Alex Thumm said. “Many jurisdictions in Canada and the United States have been using these lotteries for cannabis retail applications.”

As a result, the Potorium and Green Room received council’s endorsement, while Buddy’s Place, formerly LeafCross, was the odd one out. Kootenays Cannabis Tree, formerly Kootenays Medicine Tree, also received approval. It was the only applicant for the Lakeside/industrial zone. No one applied for the single spots available in Railtown and Fairview. Council previously capped the overall number of dispensaries it would allow at five.

“We were expecting many more applicants, a couple dozen perhaps, a year ago when we put these rules in,” Thumm said. “Hence the lottery and creating a procedures bylaw that would accommodate all that.”

All the applicants have previously operated within the city. Buddy’s Place now has a few options: they can seek a land use amendment or seek a temporary use permit, which is a quicker process than a land use amendment but is only good for three years. Or they can apply to operate in one of the two areas of the city that did not have any applications.

Although the city has now given its okay, final approval of the applications still rests with the province.