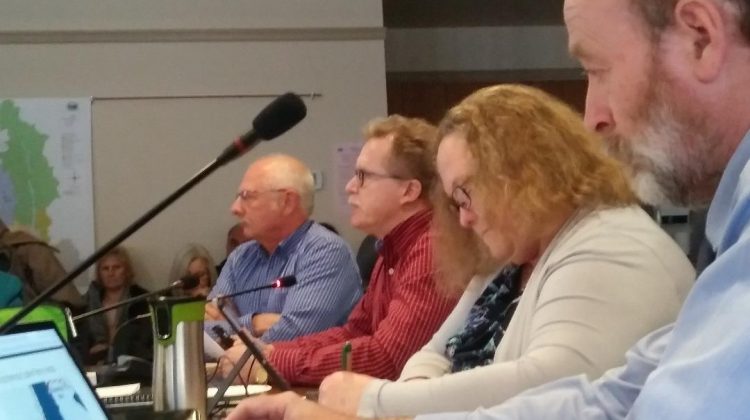 From left, Mike Jeffrey and Herve Blezy present to the Regional District of Central Kootenay board on the issue of the Kootenay Lake ferry while directors Janice Morrison and Garry Jackman listen. (Photo: Greg Nesteroff)

East Shore residents seeking to revisit the decision to leave the Kootenay Lake ferry’s western terminal in Balfour are asking the Regional District of Central Kootenay and other local governments for support.

Herve Blezy, who appeared before the board this morning on behalf of the East Shore Advocacy Society, asked directors to consider endorsing their call for planned upgrades at the Balfour terminal to be placed on hold while a socioeconomic study is completed on moving the terminal to Queens Bay.

“We want to have a balanced view for the first time, with residents on both the west and east shores and the entire region,” he said.

He criticized the public process that led government to decide in 2016 to stick with the status quo. “There were only face-to-face meetings on the West Shore, not the East Shore,” he said. “In reality, there should have been consultation all the way from Castlegar to Cranbrook.”

Blezy said the study they are calling for would take a broader view and consider the capital and operating costs of both the Balfour and Queens Bay options.

The RDCK board passed no motions today. But the presentation was nearly cancelled before it began, as Area E director Ramona Faust, whose area includes Queens Bay and Balfour, argued unsuccessfully that they should not hear it.

“I think there was a lot of information provided that ignores some of the salient facts,” she said. “That information was provided to get the issue reopened. There are issues that are beyond our mandate and it is easy to use us as a political instrument. I believe this was one of those times.”

Faust said her constituents would like to provide the opposing view, but won’t get an opportunity to appear on the agenda before July.

“If a resolution came up at the next meeting in favor of what they’re asking, the other side has not been heard. For the people of Queens Bay and Balfour, every time this comes up, it turns them inside out.”

Faust was also unhappy because she said last fall, they received a request from residents of Balfour, Johnsons Landing, and Argenta to make a presentation about landslide risks, but they were turned down.

Blezy, who called the ferry issue the region’s greatest “energy improvement opportunity,” said they have also approached Creston, Castlegar, Cranbrook, and Kaslo with a similar request.