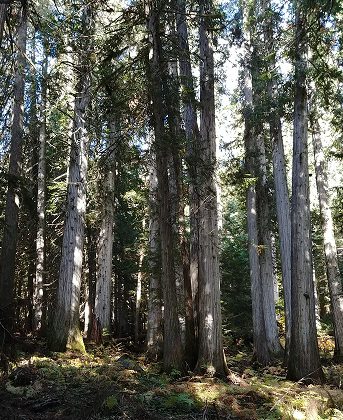 That two kilometer buffer zone, or wildland urban interface,  has been identified as the most important for fuel management, said Hamilton, which is where the structures are located.

Despite the work that’s still ahead, the RDCK’s program has seen some of the best uptake in the province. A big part of that is due to the nine wildfire mitigation specialists that are there to help

“It’s a pretty unique initiative, there’s nothing really like it going on,” said Hamilton. “Fire Smart Canada is using us as a kind of a pilot project for this. It’s been highly successful, it’s had the most uptake in all of British Columbia.”

Hamilton also highlights the great collaborative work going on between BC Parks, the BC Wildfire Service and the City of Nelson. One project that is expected to get underway this fall is fuel break in West Arm Provincial Park.

Another initiative that’s been successful for the regional district is the Community Fire Smart Recognition Program. It’s carried out on a neighbourhood level where someone steps up to be a community champion.

“Cleaning up communal areas, group sharing, helping people in that community that don’t have the access to resources to do the work themselves, and through that they make a community recognition board,” explained Hamilton.

He adds that all the work doesn’t have to be done to achieve the recognition, but there has to be a plan in place. While there are only five areas right now that have been recognized with the Community Fire Smart designation, including Woodbury and Queens Bay, many more are in the process of joining.

Another thing the RDCK has been spearheading across southern BC is the volume of fuel treatments. 1,200 hectares have been treated already; 225 last year alone. Right now there’s proposed treatment prescriptions for 1,500 hectares over the next few years.

Retention of trees varies significantly depending on location and the type of species. The three things that happen during treatment are the under story fuels are reduced or surface fuels cleaned up, the tree crowns are spaced out, and trees that are left can be limbed up to two to three meters high.

Hamilton iterates that they can only work on crown land and there’s nothing available for large private properties.  He says their big focus is working to help home owners get a Fire Smart assessment done which is the single most important thing that can mitigate the risks.