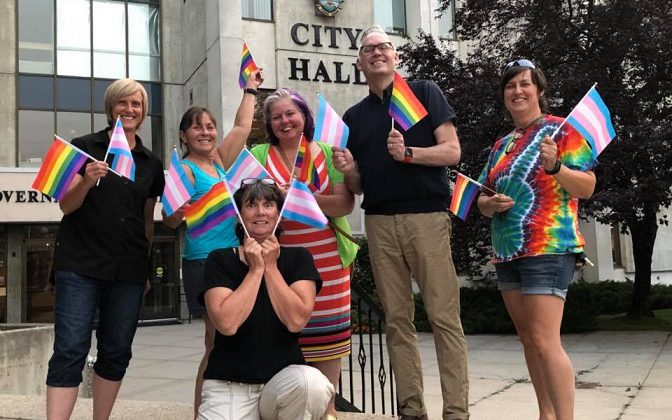 Kootenay Pride will raise the rainbow and trans flags tonight in front of Nelson City Hall starting at 5:00PM (Supplied by Kootenay Pride)

Kootenay Pride is raising the rainbow and trans flags at Nelson City Hall today at 5:00PM in celebration of the 50th anniversary of the Omnibus Bill or Bill C-150.

“There are people walking around who have criminal charges from when it was a crime for doing something with somebody else of the same sex. It was totally consensual sex, but it was illegal, so they have criminal records because of that, but the Omnibus Bill changed that in 1969 and it’s a big deal. It needs to be commemorated for all the work,” said Myers.

She says Kootenay Pride received some funding from Heritage Canada to buy the flags and hand out lapel pins at the event. Every one is invited to attend.

It’s the second time Kootenay Pride has raised the flags in front of City Hall; however, council have recently decided that non-profits will no longer be allowed to use the flag poles or the Baker Steet banner space to promote their events.

According to the City, this is due to the controversy around community banners and the need for Council to remain neutral with its policies. The right to life banner stirred debate when it was put up and Myers is disappointed with council’s decision.

“That small minority has silenced numerous groups, including the banner that’s there right now – it’s the Invasive Species Society. Most of these banners are pretty innocuous and can be supported by most people,” said Myers.

She wishes council had found a better way of getting around the issue, for example, not allowing the banner space to be used for “an opinion.”

Kootenay Pride’s request to raise the rainbow and trans flags was made before council’s decision to repeal its policy, but as of May 10 the City is no longer accepting banner or flag applications.