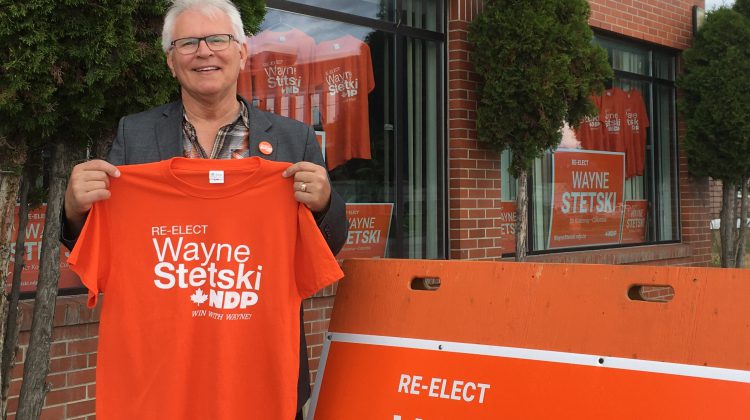 Wayne Stetski is seeking re-election in Kootenay-Columbia in the 2019 federal election for the NDP. (Bradley Jones, MyEastKootenayNow.com staff)

He said the message was loud and clear that supply management is needed to ensure the survival of the industry, while also keeping the high standards in Canadian products.

“I think supply management is absolutely critical to making sure that we have a vibrant dairy industry across the country. With quote, it has helped ensure that farming continues, dairy farms can continue to exist.”

Stetski said he doesn’t want Canada to give anything away related to food or water security in free trade agreements.

Fighting climate change is also a priority for Stetski. But he said it’s a fight that can actually boost the economy rather than stifle it by creating 1 million “good green jobs” according to his discussions with the Canadian Labour Congress.

He says the goal is to have crews retrofit every home in Canada to reduce its carbon footprint and delve into the energy sector.

“We also need to go a green energy future and here, that is geothermal. We have hotsprings here for a reason. Solar energy, Cranbrook is the sunniest city in british Columbia and of course there is a solar farm in Kimberley. Also, wind and if we do that we create good quality jobs right here at home.”

Stetski said he understands the fear and resentment that a lot of oil patch workers may have, with they’re job security at stake should a transition take place.

“A figure came out that I hadn’t heard before that About 37% of people working in oil and gas making $100,000 to $200,000 a year do not have post-secondary education. When people walk up to these people and, some even say ‘your job is bad’ well what are they going to move on to? We have to have a transition program. We have to have re-training in place.”

Drawing from his campaign trail, Stetski said he spoke to a family with two sons who have made the transition from oil and gas to geothermal and solar, making the same wage.

As for the federally proposed carbon tax (which does not affect B.C as there’s been a carbon tax since 2008 under the B.C. Liberal Government), Stetski says it doesn’t actually negatively impact the average Canadian.

“The Parliamentary Budget Officer, who is independent, looked at the Federal Carbon Tax proposal. This is the Liberal Government and I’m NDP but I like to deal in fact. The PBO said that with the federal proposed tax, 80% of people living in those provinces will receive more in their annual cheque than the carbon tax costs them. The wealthiest people will pay more.”

After the B.C. Carbon Tax was imposed has been B.C. leading the country in economic growth while reducing greenhouse gas emissions. But Stetski says it may be a good idea for B.C to adopt the federal method of giving residents an annual cheque to aid in the increased cost of living. Another point on the carbon tax that Stetski made clear is that he doesn’t want it to be a general revenue tax, but used specifically for green projects.

“Put a carbon tax in place and it will kill Canada. British Columbia flies directly into the face of that and says that is just fear mongering.”

For more information on the NDP candidate and the upcoming All Candidates Forum, read below.

The Creston Valley Chamber of Commerce is hosting an All Federal Candidates Forum in Creston on October 16th.

The forum will be moderated by Chamber Vice-President and Creston Valley Advance Publisher Brian Lawrence as well as MyCrestonNow.com reporter, Jensen Shields.

All 10 questions will be submitted by the public and read by the moderators. Each Candidate will introduce themselves and then be will be allowed to speak for up to one minute in response to each question.

Questions for candidates must be submitted to [email protected] by noon Oct. 14.

The free event will run between 7:00 pm and 9:00 pm at the Prince Charles Secondary School Auditorium.

*With Files From Bradley Jones, MyEastKootenayNow.com*

Running for a second term in Kootenay-Columbia, Stetski secured the Member of Parliament seat in 2015 after previously serving as the Mayor of Cranbrook from 2011 to 2014.

“It’s been a real honour to serve the people of Kootenay-Columbia for the last four years as their Member of Parliament and I hope to be able to continue,” said Stetski. “I’ve been able to advocate in Ottawa in Parliament for issues that are important to people the Kootenay-Columbia and I get a lot of good feedback from people saying that they think it’s been a good four years and so I’d like to continue another four years.”

Stetski opens his NDP Campaign Office in Cranbrook on Tuesday, September 17, 2019, as they are set to hold a grand-opening event from 5:00 pm to 7:00 pm. Stetski’s campaign office is a 205B Cranbrook Street North, across from the Ktunaxa Nation Government Building.

Entering the 2019 federal election, Stetski and the NDP’s platform A New Deal for People is 109 pages, encompassing some of their key priorities.

“We have a great country as people know, but we can have an even better country,” Stetski told MyEastKootenayNow.com.

Listing a few of his priorities in the upcoming election, Stetski said the NDP wants to work towards free university and college education, as well as implementing proportional representation voting if they are elected, among others.

Another pivotal piece of the NDP’s platform is universal health care coverage, which would see the party work with Provinces and invest $10 billion every year into expanding Medicare.

“Going forward, we also want to make sure that prescription drugs are included in universal health care, they should never have been left out to begin with,” said Stetski. “By next year we intend to have free Pharmacare in place for everyone, and ultimately we want universal health care to cover you from the top of your head to the bottom of your feet so that anything to do with your health, you should be able to use your health care card and not a credit card.”

Wayne Stetski is vying for the seat in Kootenay-Columbia against five other candidates which includes Rob Morrison for the Conservatives, Robin Goldsbury for the Liberals, Abra Brynne for the Green Party, Rick Stewart for the People’s Party of Canada, and Trev Miller for the Animal Protection Party.

Voters in the riding head to the polls October 21, 2019, to elect their next Member of Parliament.