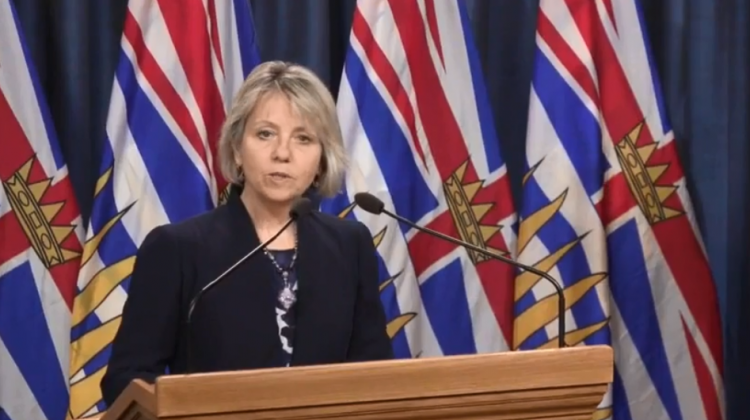 As of Tuesday, the Province’s confirmed cases of COVID-19 sits at 617, an increase of 145 cases since Sunday.

Of the provincial total, 41 cases are within in the Interior Health region.

Provincial Health Officer Dr. Bonnie Henry said that 173 people have fully recovered from the virus in the province.

“That’s 28% of our total cases, and I think that’s a really positive thing. It shows us that most people, particularly young, healthy people who have a milder illness, are able to be managed at home and are recovering from this,” said Henry. “We’re learning that from around the world, once you recover from this, you have immunity for a period of time, at least the next few weeks to months.”

According to Dr. Henry, the number of deaths from COVID-19 within B.C. remains at 13 as of Tuesday.

“Most of our deaths, tragically, have been related to the one long-term care home, the Lynn Valley Care Home, where the outbreak had been going on for some time before we were able to get a handle on it. 10 of the residents have died from that outbreak” said Henry.

Henry also spoke of the Pacific Dental Conference and the spread of the virus there.

“This conference is a major source of some of the infections that we’ve been seeing in B.C. We are now up to 32 people we can link directly or indirectly to that conference,” said Henry. “all of those that were attending the conference were notified of a positive case and asked them to self-isolate.”

Henry added that nearly 30,000 coronavirus tests have been performed.

Dr. Henry concluded her daily update with some words of encouragement to B.C. residents.

“We’re doing everything that we can right now, and we need you to do the same as well. We will make it get through this, none of us need to get this virus, that’s why the physical distancing is so important,” said Henry. “Most people are doing their very best at this, and we can see that in our community right now. The other part of it is ensuring that we maintain our social connections, and that is what’s going to get us through this.”