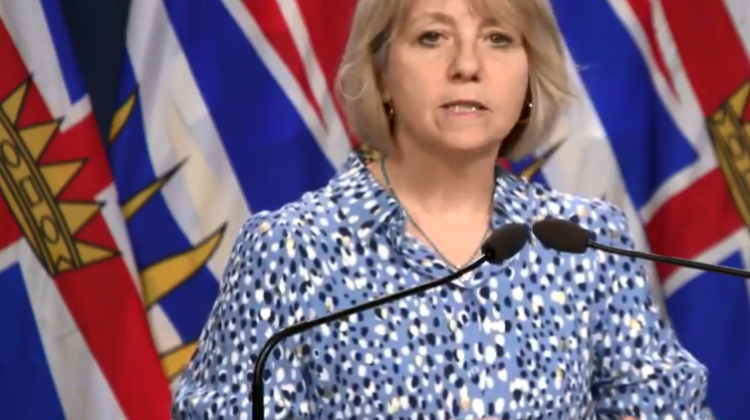 Dr. Bonnie Henry delivering the daily Provincial COVID-19 briefing on May 13, 2020. (Supplied by the Provincial Government of British Columbia)

Provincial Health Authorities have reported 16 new COVID-19 cases on Wednesday, totalling 2,376 as of May 13th.

Meanwhile, 1,859 people are no longer showing symptoms of the virus, resulting in 517 infections remaining.

Dr. Bonnie Henry, Provincial Health Officer, said the recovery rate across the province is around 78% for the time being.

As well, one new death has been attributed to the virus, adding up to 132 deaths in B.C.

The Interior Health region has reported no change from Tuesday, remaining at 180 total infections.

Following the launch of the BCCDC Your Story, Our Future survey on Tuesday, Henry touted the positive reception it has gotten in its first 24 hours. She encourages all B.C. residents to take the time to complete the survey.

“Over 75,000 people have responded, so thank you for that. This is valuable information to help us understand where we’ve been, who has been affected, and where we need to go,” said Henry. “We are asking for a wide range of information in this survey, and there is a reason for that. We need it to help us understand the similarities and the differences in the experiences that we have all had.”

As the province will soon make its way into opening up businesses and parks, Dr. Henry said that many of the orders put in place will not be lifted just yet.

“My order limiting public gatherings to fewer than 50 people will remain in place, but that is a maximum. That only applies if you are able to provide for them those safe distances between us,” said Henry. “One of the most important pieces that is also not going to change is that if you are sick at all, or if you were around somebody who is sick, you need to stay home, and stay away from others.”

The rules will also apply to religious services, which Henry said can resume next week, as long as public health measures are adhered to.

“We have seen outbreaks starting from religious gatherings, so be mindful of the room your in, how long the service may be, and who are your congregants, particularly if they are elders,” explained Henry. “You need to make sure that you’re continuing to modify those parts of the service that are important so that you don’t have that touching of multiple people.”

Henry said that having shorter, or multiple services while maintaining virtual meetings is advisable to religious groups.

As people will soon be able to go out more often and interact with others, Henry said that people must make their own choices on how to expand their social circle.

“Think about who in your life is at higher risk, and who is in contact with the people that you are in contact with. I understand that people want really clear rules that apply to everybody, but the reality is that our path forward is individually based on our own unique circumstances, and that goes for businesses as well,” said Henry.