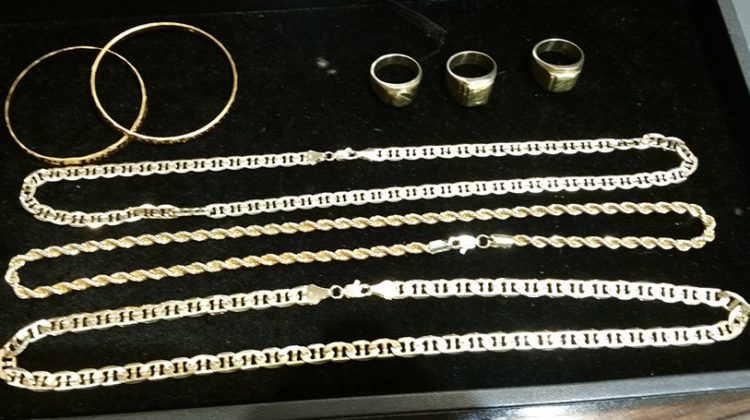 Creston goldsmith, Tony Mulder, shared a photo of some of the bogus jewelry he assessed in 2019. The fake jewelry was always returned to the owner. (Image supplied by Tony Mulder)

Travelling fraudsters are once again attempting to dupe locals into buying fake gold and jewelry.

“They often target the kind of individuals who have a natural inclination to want to help someone in need or distress,” said Cpl. Jesse O’Donaghey, spokesperson for the BC RCMP in the Southeast District. “As we continue to transition into our new normal, RCMP ask residents to use their common sense and intuition to avoid such scams that will hit you in your wallet.”

“RCMP Southeast District Crime Analysts found that a total of 61 reports of fake gold scams were reported to RCMP across the Southeast District, between April [2020] and December 2019. Scammers were active in both small town communities and large urban centers and conned residents out of an estimated $15,000.” Cpl. O’Donaghey added.

So far this year, the rate of fake gold scam occurrences are reportedly lower.  Cpl. O’Donaghey suggested that it could be in part due to the implementation of COVID-19 restrictions by British Columbia public health officials.

The RCMP provided some tips on how to recognize the fake gold scam should it take root in your town:

“Oftentimes victims are embarrassed to acknowledge that they have fallen for these tactics. If you or a loved one has fallen victim to a similar scam, please call your local police.” said Cpl. O’Donaghey, noting many fake gold scams go unreported.

For more information on fraud prevention, please or visit the BC RCMP website or the Canadian Anti-Fraud Centre