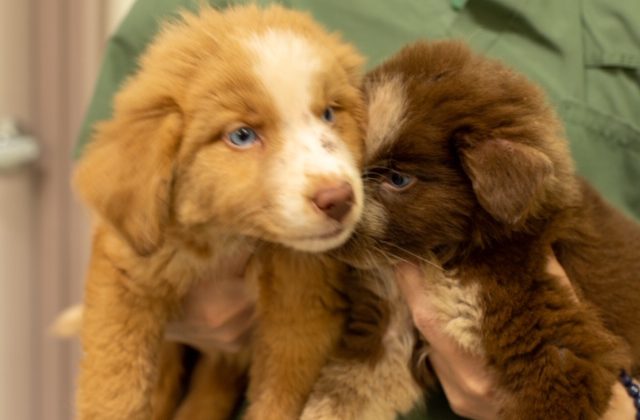 An alleged stabbing incident first led to a false report, treatment of an unrelated medical condition and then… puppies.

“I did get a call that there was six in custody,” Said Sgt. Mike Wicentowich. “It was nice to know they were puppies. They were underfed and pretty smelly but they were awfully cute and taken care of now.”

Sgt. Wicentowich said Trail and Greater Detachment RCMP first attended to a 35-year-old Grand Forks man at a residence in the 900 Block of Mountain Street in Trail, who suffered a stab wound to his hand on July 22, 2020.

“The subsequent investigation quickly revealed that the wound was self-inflicted and the man was arrested for Public Mischief, contrary to the 140(1) of the Criminal Code, for filing a false report,” the RCMP said in a statement.

According to Sgt. Wicentowich, police also found a 24-year-old malnourished man who required medical attention for an unrelated medical condition and was promptly taken to hospital.

But that’s not all.

“Additionally, in one of the rooms [RCMP officers] found six puppies,” said Sgt. Wicentowich. “The puppies were very young and appeared to be undernourished and didn’t have access to proper food and water. So due to their condition, we seized them on behalf of the SPCA.”

The puppies spent a night in a police cell interacting with officers before being picked up by West Kootenay SPCA on July 23.

Sgt. Wicentowich added, “The SPCA will contact the owner and negotiate their future well-being but they’re also conducting their own investigation into the welfare of the puppies and will ultimately decide what will happen with them next.”