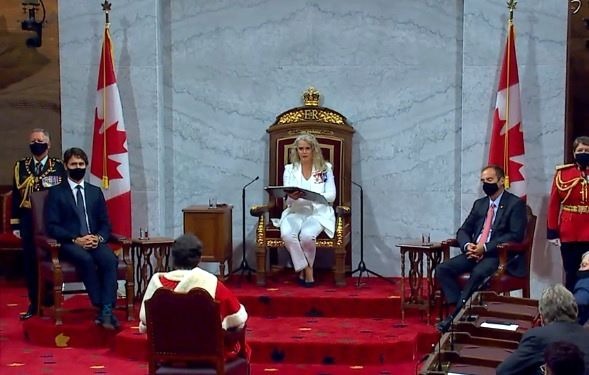 The Liberal government is pledging to create one million jobs over the next year. In the Throne Speech on Wednesday, they also pledged to expand the employment insurance system and will extend the emergency wage subsidy program into next summer.

The road map for the next sitting of Parliament also promised a national childcare and early education system to help women forced out of work because of the COVID-19 pandemic. The government’s plan also outlines support for businesses through expanding the Canada Emergency Business Account to help businesses with fixed costs and provide money for businesses that may be required to temporarily close down at the request of local health units.

The plan is built on four pillars:

The government has also promised national strategies for long-term care standards and a speedier development of a national pharmacare program, and a disability benefits program. The Liberals promise to help the provinces increase COVID-19 testing capacity and continue to pursue safe testing options and move as quickly as possible to approve new testing methods. Food insecurity among Indigenous and Innuit communities will also be addressed over the next two years along with an energy-efficient retrofit program as it works to meet its commitment to net-zero emissions by 2050. The government will also ban single-use plastic next year.

In the Throne Speech, the government promised to get tougher on online hate in order to help eradicate systemic racism and increase diverse hires in the public service. It will implement changes to help eliminate police discrimination and will move ahead with RCMP reform.

The plan does not include a dollar amount for all the programs promised on Wednesday and was light on definitive timelines for the government to implement its plans. The Throne Speech will kick off a series of confidence votes for the minority Trudeau government in the coming days. The Liberals must garner support from other parties in order to avoid forcing an election.