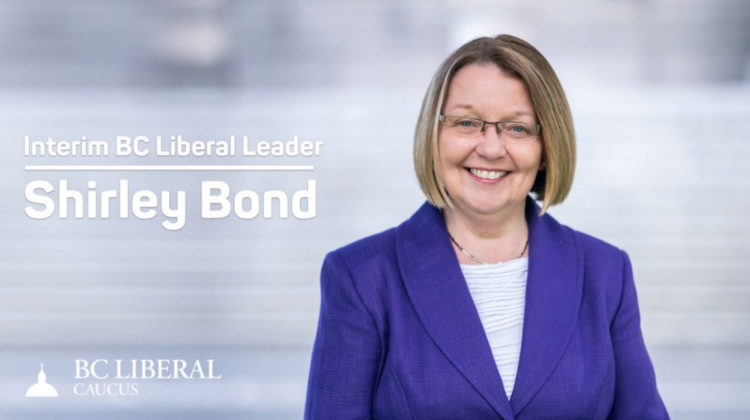 The Prince George-Valemount MLA will lead the BC Liberal Caucus until a leadership competition is held.

The BC Liberal Caucus elected Bond to be the interim leader prior to the MLAs being  officially sworn into the B.C. Legislature on Friday, November 27th.

“I appreciate the confidence and trust my colleagues have placed in me as we work together to hold John Horgan and the NDP government to account in the coming months,” said Bond in a statement on her appointment. “I want to thank Andrew Wilkinson for his service as leader over the past several years and I look forward to continuing to work with him and our entire team of new and returning MLAs to present a positive vision for this province.”

“As the Interim Leader of the Official Opposition, it’s now my duty to ensure that the voices of British Columbians from all across the province are heard by John Horgan and his NDP government,” added Bond. “In the coming days, I’ll be meeting with caucus members, appointing a leadership team, and assigning MLA critic portfolios. We have an excellent team of MLAs ready to get to work on behalf of their constituents and all British Columbians. We look forward to having the opportunity to return to the Legislature as soon as that is possible.”

Stephanie Cadieux has also been appointed as the new Caucus Chair for the BC Liberal Party.

John Horgan and the BC NDP are swearing in their new MLAs on Tuesday, November 24th before Minister positions are appointed on Thursday, November 26th. The B.C. Legislature will then return for a brief session beginning December 7th.