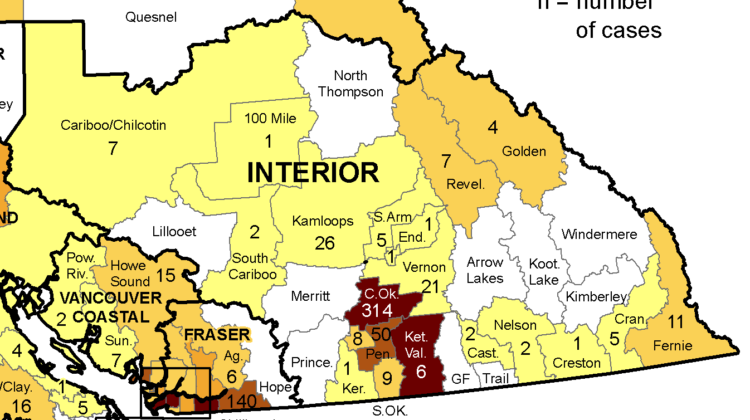 A map of the local case numbers for the Interior Health region. (Supplied by the BCCDC)

The BC Centre for Disease Control has published data on a localized level to show more exact locations of COVID-19 cases.

The numbers are updated weekly, on Wednesdays, with cumulative data released once a month.

According to BCCDC data, the Kootenay Boundary region has confirmed 10 new cases between December 4th to 10th, with a total of 89 since the pandemic began.

Between November 29th to December 5th, the BCCDC has reported two cases in Castlegar, two in Nelson, one Creston and none in the Kootenay Lake, Arrow Lakes, Trail or Grand Forks Local Health Areas.

As for cumulative case numbers in the region, the Nelson area has seen the most between January and November, with 44 infections.

As for the rest of the region, Trail has seen 15 total cases, Castlegar has reported 12, 14 were confirmed in Creston, three have been reported in Grand Forks, two in Arrow Lakes and just one person has been confirmed in the Kootenay Lake area.

A majority of the Interior Health region’s numbers comes from the Central Okanagan, which has seen 1,077 cases between January and November and confirmed 314 between November 29th to December 5th.

As for the Interior Health region in general, it has seen a total of 2,502 infections with 1,817 recoveries. 82 new infections have been confirmed on Thursday

According to the BCCDC, there are 679 active cases, 19 of whom have been hospitalized from the virus, with four in intensive care as of Thursday, December 10th.

Provincially, 723 new cases have been reported to the BCCDC, bringing the total of active cases to 9,524.

Across the province, 346 people are in hospitals because of COVID-19, with 75 in the ICU.

To date, the BCCDC has attributed 587 deaths to the coronavirus. 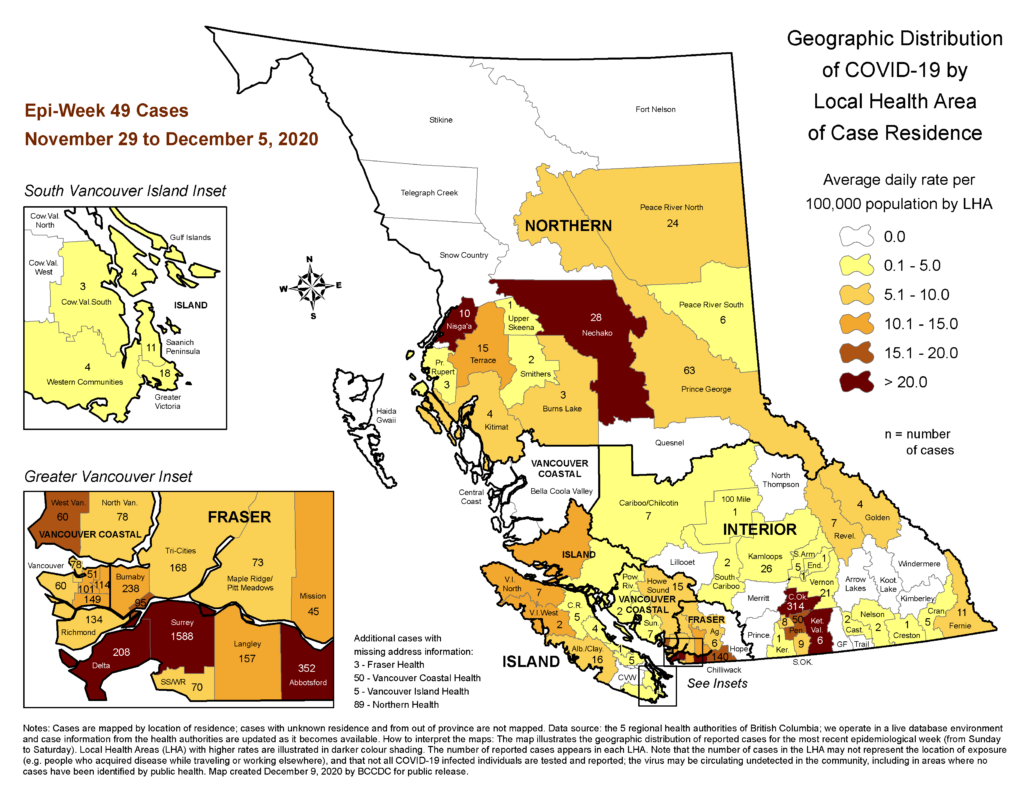 Localized COVID-19 case numbers across B.C. (Supplied by the BCCDC) 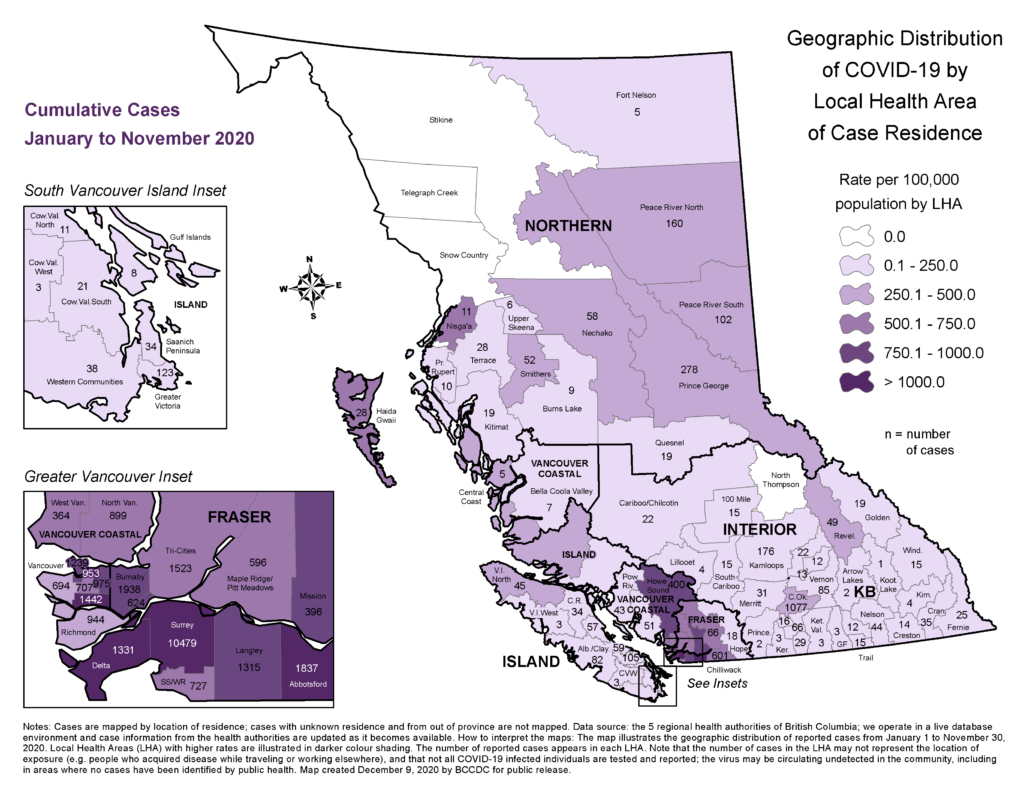 Localized and cumulative COVID-19 case numbers across B.C. (Supplied by the BCCDC)

Consider the following graph. The daily test rate per one thousand people in the Interior Health region spiked dramatically through September and mid-October. However, the positive test rate remained below 1%.

Once the positive tests results started to increase above 3%, a wider net was cast and more daily tests were conducted. More tests, more cases, yes. But the test positivity also increased dramatically, rates not seen since the “first wave” of the pandemic. 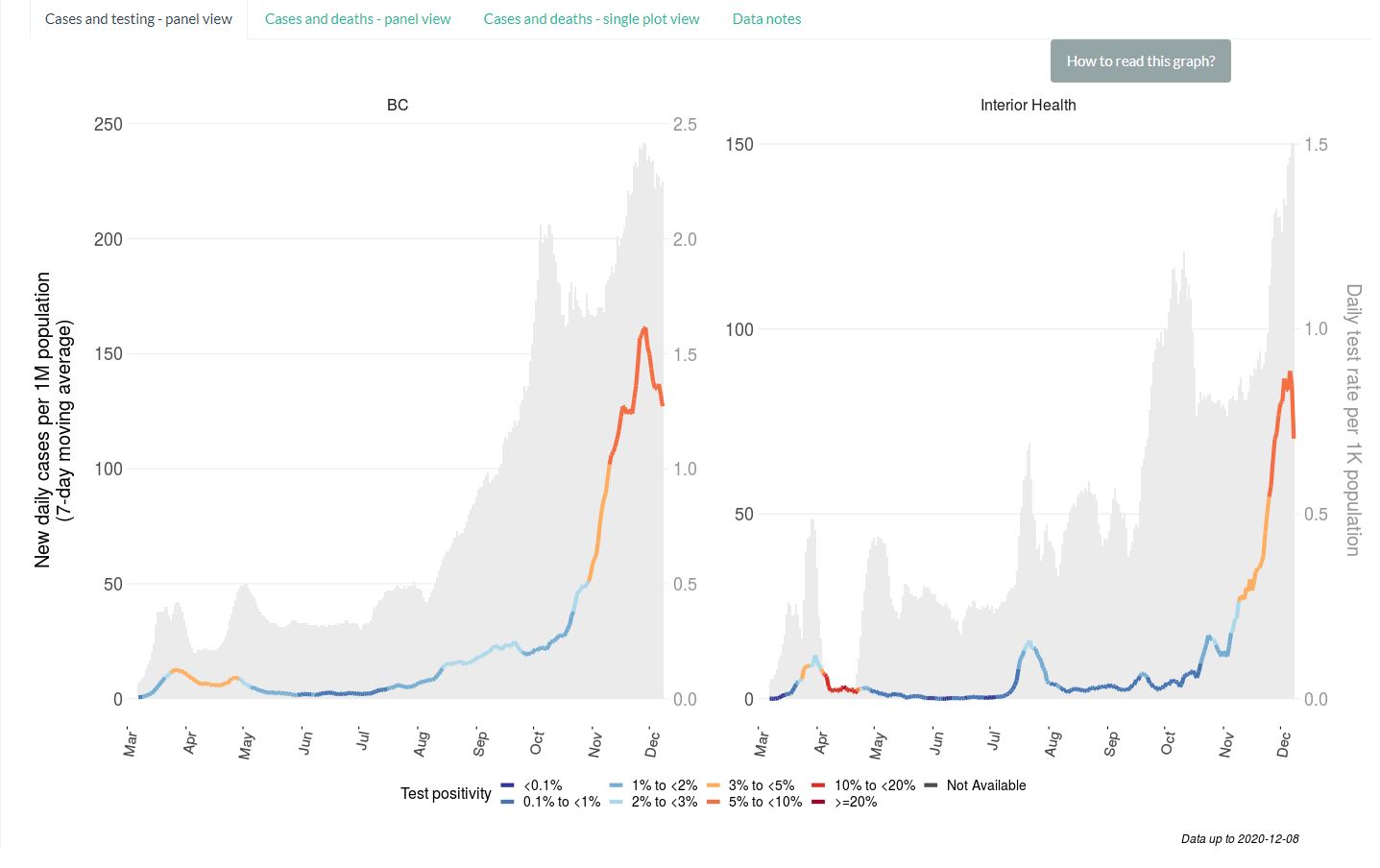 It is important to take into account the daily test rate as well as the number of tests coming back positive as both factor paint a more detailed picture. (Supplied by the BCCDC)