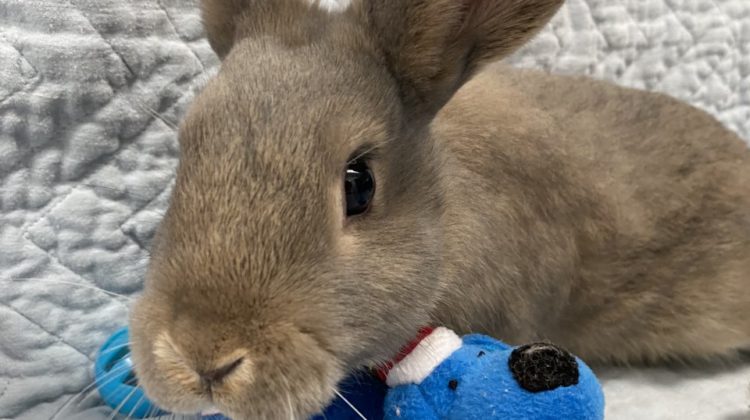 One of the rabbits up for adoption from the SPCA. (Supplied by BC SPCA)

After 23 bunnies were surrendered to the BC SPCA in the Kootenays, the organization is reminding the public of the importance of getting your pets spayed or neutered.

The SPCA said the rabbits, between eight and 20 weeks old, along with one adult, were brought to its East and West Kootenay shelters last month as a result of unplanned litters.

“It is very rare for us to have this many bunnies and we are concerned by the dramatic intake over the past year,” said Christy King, manager of the BC SPCA in East Kootenay. “In just one year, a single female rabbit could have as many as 144 baby bunnies. It is extremely important to make sure your rabbits are spayed and neutered or you could easily find yourselves with an unmanageable number.”

The BC SPCA notes that all the rabbits are healthy and ready to be adopted, and those interested in taking home a bunny can visit the SPCA adoption page and submit a questionnaire.

King said rabbits make great companions, but potential owners need to know what it takes to care for the animals.

“They are very different than cats or dogs, so those who are interested in adoption should be sure to research rabbit care to make sure it is a good match for their needs and lifestyle,” said King.

Some of the rabbits have already been spayed or neutered, and the ones who have not been fixed yet will have the surgeries included in their adoption.

The SPCA said the surge in rabbit intake highlights the importance of spaying and neutering your pet to prevent unwanted litters as well as for your pet’s physical and behavioral health and well-being.