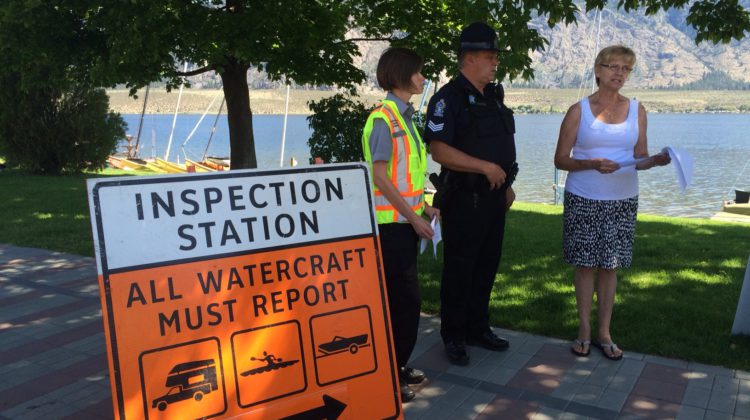 A sign for an inspection station, looking for invasive species on boats. (Supplied by the Government of British Columbia Flickr)

Inspection stations are open around the province to look for invasive zebra and quagga mussels hitching a ride on boats to prevent them from coming into B.C.’s waterways.

From now until late October, B.C. Conservation Officer Service (COS) inspectors will check for aquatic invasive species as part of the Province’s Invasive Mussel Defence Program.

The Province said inspectors will also educate people on the importance of preventative steps that all boaters should practice when moving between lakes and rivers.

“Invasive species like zebra and quagga mussels are a major threat to our ecosystems and infrastructure in British Columbia,” said George Heyman, Minister of Environment and Climate Change Strategy. “Through our Invasive Mussel Defence Program, we’re taking the necessary steps to protect our waterways today and for the years to come.”

Those carrying watercraft in B.C. are required to stop at an open inspection station. Failing to do so can result in a $345 fine.

“May is Invasive Species Action Month, which is a great time for each of us to take action to protect our local lands and waters. While staying close to home, we can each make a difference by checking our backyards, planters and local parks to make sure we do not have any unwanted invasive species,” said Dave Bennett, chair, Invasive Species Council of B.C. “Simple actions, such as checking that your tires are clean from seeds and plants before using your bike, trailer or ATV, will help stop the spread. Take the time to be alert, and report any unusual species. You can help protect our habitats from aggressive invasive species.”

The B.C. Government is investing $12-million to help combat invasive species, it said the money will be used to create job opportunities, provide training and develop skills to detect and remove invasive species and control those already in the province.

B.C. moving ahead with reopening plan