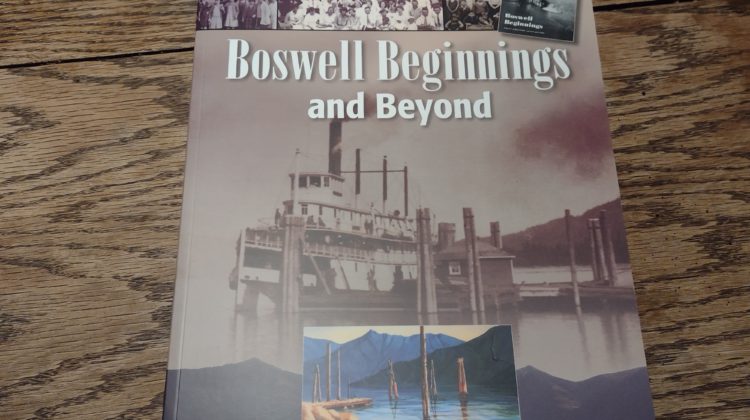 The Boswell Historical Society has just published a new edition of a long out-of-print history book about the Kootenay Lake community.

Boswell Beginnings and Beyond contains an exact facsimile of the original book, published by the Boswell Ladies Club in 1986, as well as about 100 pages of new material.

Historical society chair Margaret Crossley says the idea to reprint came at the urging of Gray Creek store owner and local historian Tom Lymbery. A few years ago, the society agreed to take the project on but decided that rather than just reprint, they would add additional material.

“It would not be as comprehensive as the original but we did try to provide some information about the community in 2020-21,” Crossley says. “We have special features on the artists of Boswell and many of the organizations and community groups active currently.”

Crossley estimates about one-third of the book is new and two-thirds is the original text, which appears exactly as it did in the first edition. “We didn’t change anything at all. We didn’t correct the errors either,” Crossley says.

Also included in the book are a number of recipes of historic value, such as a clam chowder recipe used at the Destiny Bay restaurant in the 1960s and ’70s.

“Apparently we had fishers flying into Crawford Bay airport and driving down after a day of fishing to have clam chowder in the Destiny Bay restaurant because the chowder was so popular,” Crossley says. “It took a great deal of effort, but I finally did track down that recipe. It’s reproduced as is.”

The book came out about a month ago and is available at many places on the East Shore of Kootenay Lake and will be in stores in Creston and Nelson as well.