Asay was ‘heart and soul’ of Baseball Canada program: coach 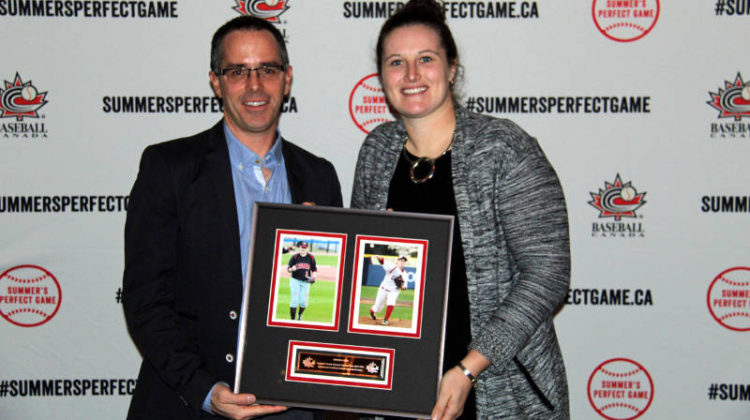 In this provided photo from Baseball Canada, then-coach Andre Lachance (left) with Amanda Asay as she receives the Women's National Team MVP Award for her performance at the Women's Baseball World Cup in Gijang, South Korea during an awards ceremony in Fredericton, N.B. Photo taken Oct. 29, 2016. (Baseball Canada via Vista Radio)

The former coach of Baseball Canada’s Women’s National Team, says Amanda Asay was the “heart and soul of our program.”

Andre Lachance coached Amanda through eight world cup championships between 2004 and 2018. He now works in a management position with the organization.

“(Amanda was) one of the best pitchers on the team and one of the best pitchers on the planet as well. Not only, she brought tons on the field of play as a baseball player but she was also a tremendous teammate. Someone who made other people better around her. A great leader as well, on and off the field, and always really, really proud to represent Canada internationally,” Lachance said in an interview with Vista Radio.

Asked about a standout memory, Lachance says Amanda pitched a complete game during the semifinal in Korea in 2016, which allowed the team a chance at gold. “It was a masterpiece of performance, as a pitcher. Defensively as well, she made important plays … and got her to receive some awards at the end of the tournament.” Canada ended up with a silver medal.

Asay died Friday in a skiing accident at a Nelson ski resort. She was 33.

Speaking about her academic knowledge, Lachance says they were fortunate in 2016 to have three athletes who were PhD candidates and Amanda was one of them. He says that knowledge was put to good use on the field.

“When you’re smart like Amanda was, you could tell on the field as well, always looking to get a little bit more information on the opponent, trying to get an edge and trying to find a way to win ball games,” he said.

As for her legacy with Baseball Canada, Lachance says “it’s always been about the people around her and that’s a credit to how she was raised. She was able to share those values to the rest her teammates and coaches. She made everyone around her better, including myself as a coach, as a dad, as a human being.”

With her contagious smile, Lachance adds Amanda was always ready to coach, welcome, mentor and “open a path” for players as young as 16.

Echoing the comments of a close friend, Lachance says Amanda was always interested in other people’s lives and “trying to get to know new people as much as possible.”

“Looking at all the praises and all the emails and messages we’re getting since Saturday that are coming from Japan, Australia, Cuba, Dominican Republic, Puerto Rico, the United States. everywhere. She made friends among opponents, which is not something you see often. Not only was she someone that cared about her team but she cared about her sport as well.”

“Being able to be around her was something special.”

Lachance says Baseball Canada is a tight-knit group and he’s been fortunate to have great athletes and coaches through difficult times. “We got a good group of support among us. It’s been a tough start of the year to say the least, a tough weekend. But we’re a really tight group and we’re all supporting each other.”