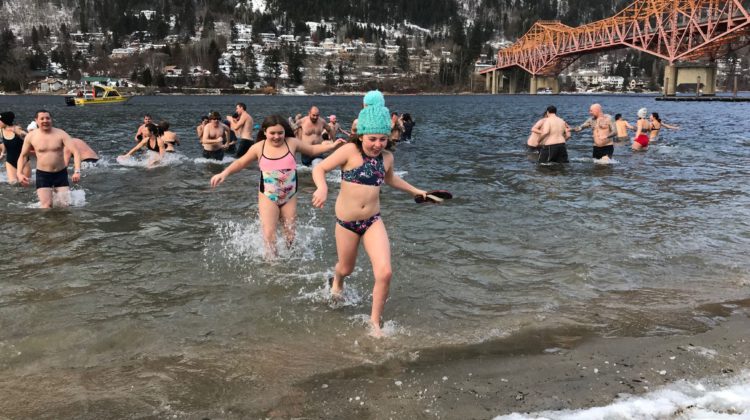 While it won’t ring in 2022, co-organizers Kootenay Co-op Radio and Friends of Kootenay Lake point out that it will be just in time for the lunar new year. According to the Chinese Zodiac, it is the year of the tiger.

The groups putting the event on are asking participants to maintain social distance with others. In order to avoid gatherings, chili and hot chocolate will not be served during the event. Instead, participants are asked to bring their own hot drinks to help them warm up after the plunge.

“We do believe that it’s possible to put together a community event and keep everyone safe,” adds Sauquet, who will be participating herself for the third time.

You are also being asked to sign a waiver before jumping in the lake. You can either visit www.nelsonpolarbear.com or sign on-site on Jan. 30 from 11 a.m. to noon. You can visit the same site to register or create a fundraising profile. You can also sponsor one or more plungers. Prizes will be given out to those who raise the most funds as well as those with the best costumes.

“I know some people have been saying ‘that’s the point of the polar bear swim,” Sauquet says. “I understand, but it’s a family friendly event. It’s not a survival challenge.”

Additionally, she says, they do not expect volunteers to be outside for two hours when it is that cold.

“The polar bear swim is an event that focuses on not just on the bravery of our Kootenay Lake community but also the vital role the lake plays in all of our lives,” says Camille LeBlanc, executive director of Friends of Kootenay Lake.

The swim is a fundraiser for both organizations.

There was no communal polar bear swim in Nelson in 2021 due to COVID, although a virtual event encouraged people to jump in the lake on their own and post videos.