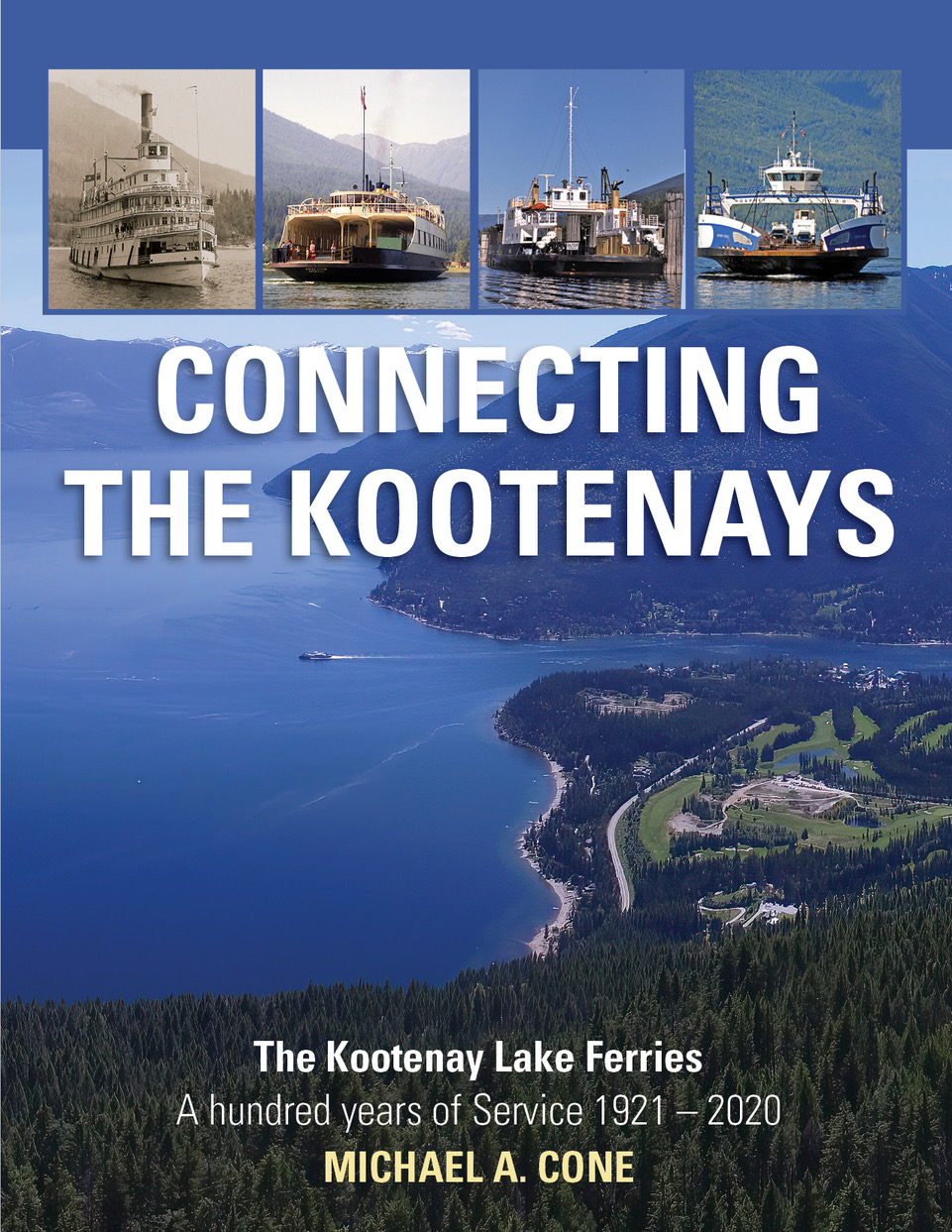 Several books have been devoted to the sternwheelers that once plied local lakes, but until now there’s never been a volume specifically about the ferries that served the same waterways.

Michael Cone rectifies that oversight with his recently published Connecting the Kootenays, which looks at a century of ferry service on Kootenay Lake.

“The sternwheeler stuff has been touched at various times in other publications,” Cone says. “Bob Turner’s books, Ted Affleck’s books. That’s been covered before. But the ferry service from 1947 when the Anscomb was built through to 2020 is all new material as far as I know.”

Cone has had a “longstanding interest in the history of navigation on Kootenay Lake,” most of it related to the sternwheelers. “But I thought this was a story that needed to be told because a lot of the oldtimers that joined the [ferry] service after the war were passing away. I didn’t want to lose their stories.

Cone started working on the project in earnest about five years ago. The book comes as the MV Balfour is set to be retired and replaced with a new ferry after nearly 70 years on the lake, although Cone says the timing is just coincidental.

The book opens with a discussion of the Grand Trunk Road, conceived in 1908 as a highway across the southern part of the province at a time when automobiles were still in their infancy. The government was unsure how to link the East and West Kootenay. Following World War I, they decided to extend the road from Sirdar to Kuskanook to connect with the CPR sternwheelers that were running to the south end of the lake anyway.

The new route, which opened in May 1921, allowed drivers to continue to the Crowsnest Pass.

“I never really full appreciated the fact that the steamer that was running from Nelson to Kootenay Landing was opening up the country,” Cone says. “It wasn’t a local service … Once you reached Kuskanook all of a sudden you could go all the way across British Columbia.”

The book also discusses the changing methods of ferry construction, beginning with hulled sternwheelers, followed by the riveted hull MV Anscomb, welded construction for the Balfour, and then plasma cutting for the MV Osprey 2000.

Cone says the detailed book will reward a careful reading.

“Some of the stories you won’t have read before. Those are based on interviews I got years and years ago with crew on the Nasookin, for instance. Those tidbits of information I’ve tried to put into the book as much as I can … I think the reader will get a lot of that if they are prepared to take the time to read it.”

In working on the book, Cone says the controversy over moving the Balfour terminal to Queens Bay (which the Ministry of Transportation ultimately opted against) caused some headaches for him in trying to get information from the government.

Connecting the Kootenays is available in Nelson at Touchstones, Otter Books, Coles Books, and the Chamber of Commerce. It’s also at the Gill and Gift in Balfour, the Creston Museum, and will be coming soon to Ainsworth and Kaslo. You can also order a copy by sending a note to: [email protected]

You can listen to the entire interview with Cone here: