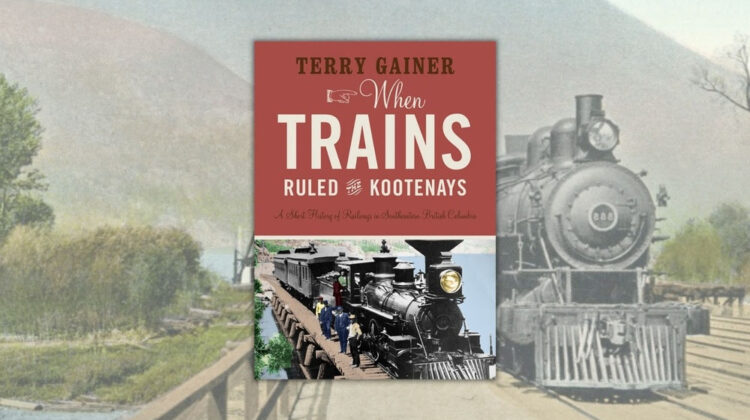 A new book presents the history of railways in the Kootenays from the perspective of the people who travelled on them.

Terry Gainer’s When Trains Ruled the Kootenays began in 2019 when the president of the Canadian Pacific Historical Association invited him to do a presentation at their conference, which was supposed to be held in Nelson before COVID intervened.

He came up with a talk called “The Battle of the Kootenays,” about the rivalry between the Canadian Pacific Railway and Great Northern in the area in the 1890s. He was also interviewed for a forthcoming documentary about Great Northern president James J. Hill.

But it was a conversation with Kootenay Lake historian/author Tom Lymbery that made him think there might be a book to be written.

Lymbery noted many books discuss the construction of railways in the Kootenays, but “nobody ever wrote a book that tells you about the people who used the transportation network that included boats and steamships.”

“That’s when the penny dropped,” Gainer says. “I thought, this is the angle of the story I want to present.”

Gainer’s love affair with railways goes back to his childhood in Banff, where his father was the station agent. They lived above the station and he grew up watching four eastbound and four westbound passenger trains go by every day. In the summers he worked in the baggage room and as a porter.

His previous book, When Trains Ruled the Rockies: My Life at the Banff Railway Station, was published in 2019.

Gainer’s connection to the Kootenays dates to 1997, when he and a partner took over Dewdney Coach Lines in Trail. He has been in the area ever since and now lives in Kaslo.

Research for the book took him to the sites of long-abandoned lines and to archives in Trail, Rossland, and Nelson. He also got to know members of the Nakusp Rail Society.

“I always got the feeling there just wasn’t awareness, at least for my comfort, about the railways of the Kootenays,” he says. “Nelson was a railway town. Without the railway and mines it wouldn’t be here today.”

He points to the city’s restored Canadian Pacific station, which was “integral” to the community.

“At one time the CP station had trains in and out all day long, about a 14-hour day of trains coming and going and boats coming and going. Nothing happened in town that didn’t go through that station. Everything came in there. The people, supplies, the merchandise, the perishables. Not only for Nelson but for that portion of CP. It was the major divisional point.”

The book presents a brief history of railway development in the Kootenays, but Gainer says “the real meat” is about the people who rode the trains, along with the sternwheelers they connected with.

“Public transportation in the Kootenays 120 years ago was better than it is today because you could go anywhere either on a train or a boat or combination thereof,” he says.

Lymbery proved to be one of his most valuable assets, as he recalled riding the train between the Kootenays and Vancouver while attending high school in Vancouver, as well as of a family trip to Halcyon Hot Springs.

The book also looks at the East Kootenay, especially how Canadian Pacific and the Great Northern went head to head for the business of the Elk Valley coal mines.

Gainer will be on tour with the book over the next several months, including an event at the Cranbrook History Centre in late April or early May; Touchstones Nelson on June 1 at 7 p.m.; and the Whyte Museum of the Canadian Rockies in Banff on July 7.

He will also present at Railway Days at Heritage Park in Calgary in August and an event in Nakusp is also possible in the summer.

You can listen to the entire interview here: