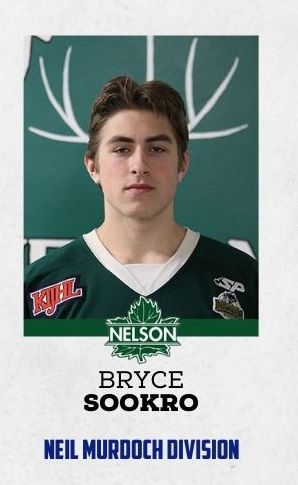 Bryce Sookro of the Nelson Leafs is the KIJHL Neil Murdoch Division rookie of the year.

The Nelson native put up seven goals and 22 assists for 29 points in 41 regular season games, tops among all first-year blueliners.

Coming into the season, the six-foot-one, 200 pound defenceman knew he would be joining a strong Leafs team and admitted to entering the league with “not much confidence at all.”

“I didn’t really expect too much out of myself. I was expecting to be a top-four D-man was my goal by the end of the season,” said Sookro. “Things just kept getting better and I kept playing better. Everything went uphill from October until now.”

And now his confidence is “pretty high.”