A study by Selkirk Innovates finds Nelson has the highest living wage among six communities in the Kootenay-Boundary that track that data.

The living wage is the hourly rate required for a family of four with two working parents and two children to meet their needs. It takes into account housing food, clothing, transportation, child care and  varies from community to community. It is calculated based on a formula developed by the Canadian Centre for Policy Alternatives.

While Nelson’s living wage was $19.56 per hour, researcher Jayme Jones found the rest of spectrum was Revelstoke, Golden, Trail, Grand Forks, and Columbia Valley, which was on the low end at $17.18. 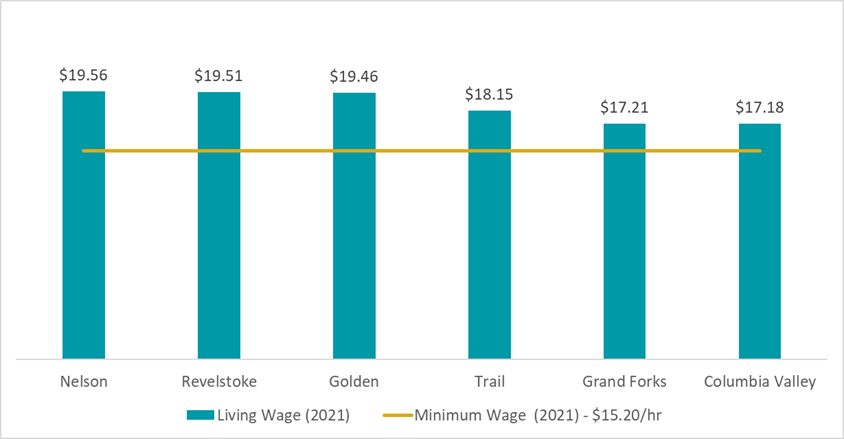 While Jones didn’t look into the specifics, “the three communities with the highest living wage are three tourism-based communities, where some of the housing costs might be higher.”

In each case, the living wage was higher than the minimum wage, which increased to $15.20 per hour last June as part of the provincial government’s poverty reduction strategy. It also announced a minimum wage increase to $15.65 per hour starting on June 1.

While that increase is tied to BC’s annual inflation rate, Jones says it’s unlikely to bridge the gap between the minimum wage and living wage, as inflation affects the latter as well.

Jones says other government policies may more successfully address that divide, including pilot projects underway throughout the province testing a $10-a-day childcare program. A living wage report suggests could lower the living wage by nearly $2 per hour.

You can find more social, economic, cultural, and environmental data on our region and sign up for a newsletter at stateofthebasin.ca.