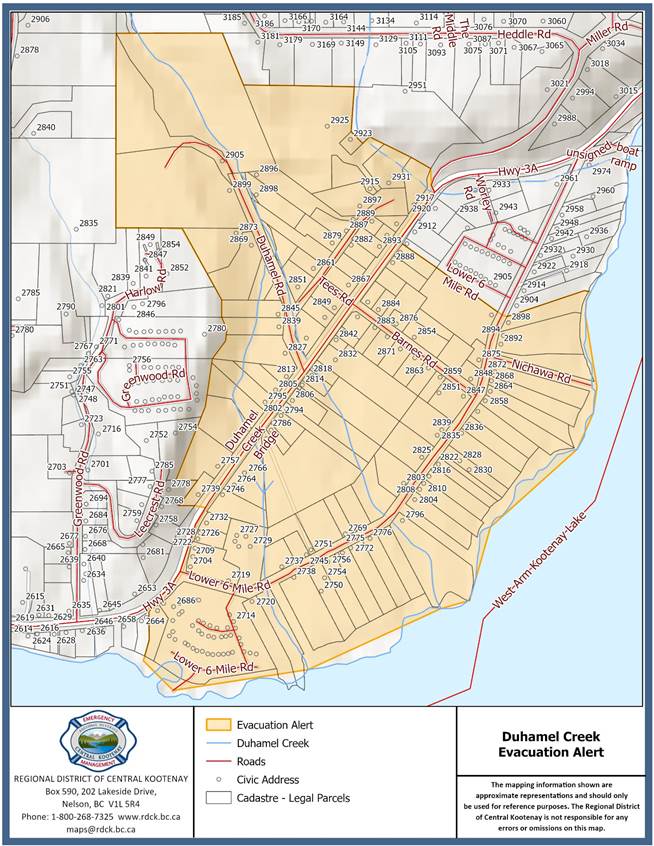 The Regional District of Central Kootenay has issued an evacuation alert for Six Mile around the Duhamel Creek fan. A map of the evacuation area is above and the list of the 121 properties affected is at bottom.

The RDCK say residents should be prepared to leave at a moment’s notice. They are suggesting preparing an emergency kit and moving pets and livestock to a safe area in case the situation gets worse and an evacuation order is issued.

Emergency operations manager Chris Johnson says the concern is due to the state of an orphan dike on the creek, which is potentially deteriorating during high water.

“It’s not because we’re super concerned about the creek topping its banks,” he says. “It’s more that that his old structure built decades ago could potentially come apart and unravel and result in the creek jumping its channel.”

Johnson says the RDCK has been looking at options for a permanent solution for the past couple of years and is in the midst of a study to get design options. He says repairing or replacing the dike would represent “a very significant piece of infrastructure” and cost “a fair amount of money” to operate and maintain.

For the moment, they have an excavator parked on the site and they are monitoring flow rates a couple of times a day. That monitoring will increase if the flows increase, Johnson says.

“That excavator is there, if it does unravel, to mitigate how much material ends up damming the creek,” he says.

The BC River Forecast Centre has issued a high streamflow advisory for the West Kootenay. River levels are rising or are expected to rise rapidly and may spill their banks or come close.

The RDCK warns everyone to stay away from the edges of watercourses and report any erosion or flooding to the Provincial Emergency Coordinator Centre at 1-800-663-3456.

A floodwatch has been issued for the entire West Kootenay. The RDCK says areas of concern include the Kaslo River below Kemp Creek, Slocan River at Crescent Valley, and various tributaries around Nelson and Creston.

The affected properties are as follows: