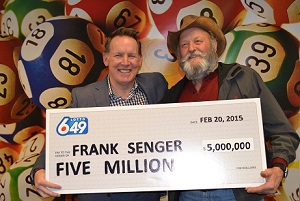 He’s won $5 million in the BC Lottery.

Senger checked his 6-49 ticket at the Pharmasave in Grand Forks and initially didn’t understand the on screen message.

He said the check-a-ticket machine had a lot of writing on it and he thought it said ‘not a winner’.

But on closer inspection he says the display had a 5 followed by a lot of zeros!

He hasn’t decided what to do with the winnings but there’s no shortage of family who could benefit.